This is quite possibly, the coolest thing that's ever happened to me! What an honor, what a thrill! And I'm equally proud to share the pages with JERSEY GODS co-creator and artist, DAN McDAID. 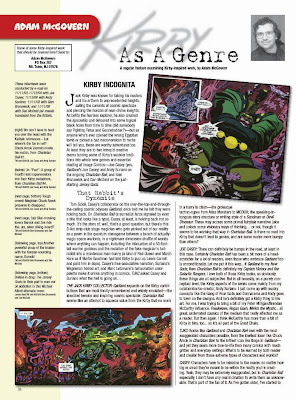 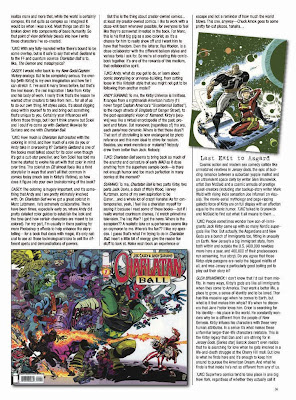 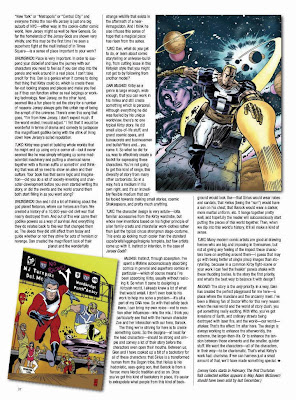 Still from the same SAMURAI JACK EPISODE as before with the robots. Eps. 18 I think. 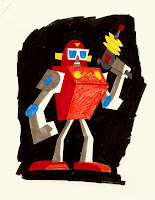 And you can still see more and more finished ones in THE ART OF ANDY.
Posted by wolfboy at 10:47 PM 5 comments:

"BETA RAY BILL WILL BREAK YOU!"

I was so excited to see one of my favorite, more obscure Marvel Characters in his own comic one-shot last week: BETA RAY BILL. For those unfamiliar, he's a horsed-faced alien version of THOR. I was so inspired I did some sketches. I know these are totally ridiculous (look at that ill-jointed right arm), but thought them fun enough to post. 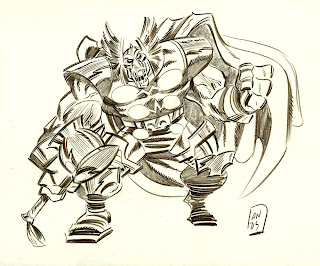 I would love to work on a series with him. Anyone? 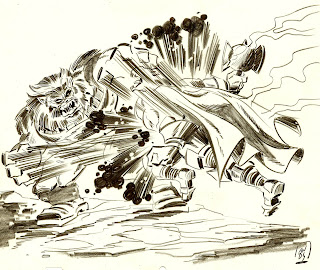 Here's a drawing of him getting, er, "blasted" by BLASTAAR, another one of my favorite characters--I've been so happy to see these types of folks pop up in the new GUARDIANS OF THE GALAXY series.
Posted by wolfboy at 9:23 AM 3 comments:

As promised, the colored version of the piece from 2 posts ago. Man, what a great eps. Way to go, Wally (and Liz)! 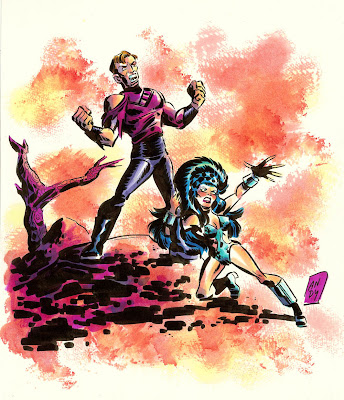 BATMAN: BRAVE & THE BOLD #4 comes out tomorrow, so I thought it safe to post some pencils from the issue. Make sure to check it out: super-surprise guest stars in the cold opener! You'll NEVER guess. Swear.

Also supposedly coming out tomorrow is the new JACK KIRBY COLLECTOR #52--in which myself and Joe Casey are interviewed!!!
Posted by wolfboy at 10:20 PM 4 comments:

My apologies in advance for the "graphic" nature of this new post. I came upon these drawings looking through a sketchbook I kept while performing at ACME Comedy Theater.

If you think these are in bad taste, you should have seen my more offensive Gingerbread Routine on stage. 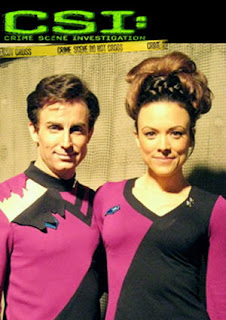 Hey all you Trekkies and Trekkers - CSI will soon join the ranks of series that have done a take on Star Trek. The following was just released by SciFiWire.

CBS, part of the corporation that owns the rights to Star Trek, will go where lots of people have gone before with a sci-fi-themed episode of CSI: Crime Scene Investigation on April 16 at 9 p.m. ET/PT, and you can watch a clip here.

In the episode, Hodges (Wallace Langham) and Wendy (Liz Vassey) run into each other at a science fiction convention for one of their favorite classic television shows that is not Star Trek and end up investigating the murder of one of their beloved actors.

The clip shows a fantasy sequence in which Hodges imagines himself the captain of a starship that's not the Enterprise—though it has the Enterprise's sound effects and background score—who expresses his feelings for Yeoman Wendy, who is not Yeoman Rand, though she shares a similar if not identical hairstyle highlighted by a comparably preposterous hairpiece.

Did we mention Battlestar Galactica's Kate Vernon is a guest star?

A couple of weeks ago, my wife Carlyn and I visited our friend, "T.V.'s" Wally Langham on the set of CSI, shot at Universal Studios (on the old Phantom of the Opera sound stage, no less!) Here's us checking out our fingerprint analysis. I'm not even going to TELL you the results the body fluids/blue light wand came up with... 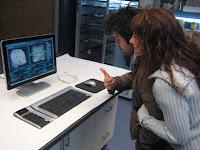 In any event, Wally thought it would be fun for us to check out the shooting of this particular episode (as detailed above). Needless to say, it was INCREDIBLE. The sets, wardrobes and even camera work was straight out of the classic 60's STAR TREK series! Here are some shots I was able to snap: 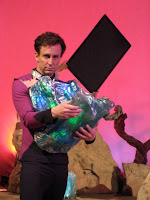 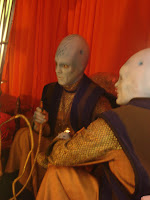 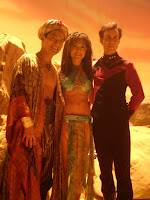 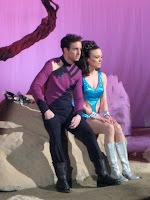 I was so inspired, I drew this little number as a thank you for an amazing experience. 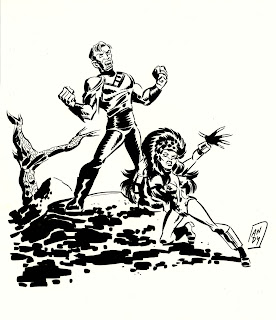 Check back to see this piece colored!
Posted by wolfboy at 2:37 PM 1 comment:

I've recently been digging though boxes in my attic, inventorying and cataloging old drawings and designs I've kept from back in the (animation) days. If you'll recall the SAMURAI JACK episode where Jack saves a village of Obsolete Robots and Cat People from Baskets-Turned Assassin Androids; episode 18, I think...

Throughout the episode, there were several of these killer robots, each with their own, unique weapons and style of killing.

Sometimes for Sam. Jack, because of the line-less visual style, I needed to trade a pencil for markers, to get a correct gauge of silhouette and form. 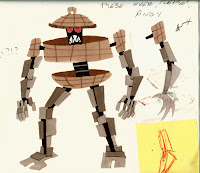 And what one of the final models ultimately looked like: Hey, if you liked this post, there are tons more in MY SKETCHBOOK. Check it out!
Posted by wolfboy at 2:27 PM 5 comments:

I know I'm now 2 days behind in posts, but only just delivered my last deadline moments ago.

That being said--and I know this isn't a typical post for me--while elbows deep in graphite lead and erasure shavings, I overheard on the news of the passing of not one, but TWO of my childhood heroes...albeit on opposite spectrums and for different reasons--and most definitely developmental stages: Mark "The Bird" Fidrych, former all star pitcher for the Detroit Tigers and Marilyn "Behind the Green Door" Chambers both died yesterday. 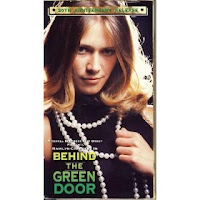 While I never had the opportunity and pleasure of making the acquaintance of Miss Chambers, as those that know me might assume due to my past encounters; though that's not to say I didn't spend a lot of...er, time with her-- I did, however meet "The Bird" several times during my youth. I can't recall what did it for me, in terms of idolyizing a baseball pitcher, having traditionally been a horrible player myself, almost always delegated to (far) right field. I will say I have more than one autographed ball from him and had an uncle that worked as an usher in the old Tiger's Stadium that was able to make the introduction. My Uncle inconsequently was missing a thumb do to some sort of saw and/or assembly line accident. 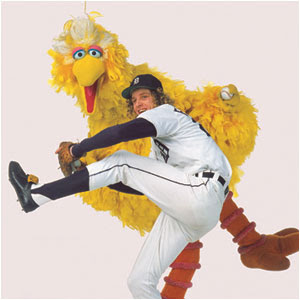 THANKS FOR ORDERING MORE BOOKS!

I was super excited to find a couple more orders of my book and tees after the last post! Not only for the sales, but the opportunity to step away from my current freelance and deadline to draw some craziness just for the fun of it. Here's one I was sad to part with but happy to give a good home... 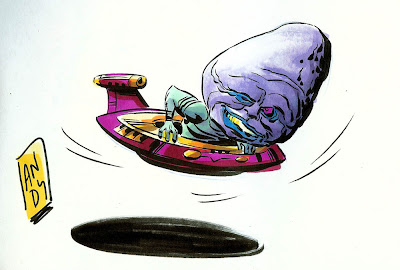 Check back next week; I'll have more time and will be posting daily (or attempting to in any event).
Posted by wolfboy at 12:46 AM 2 comments: