I may be jumping the gun a bit in displaying these images from issue #2's cover; you know, seeing as how #1 has a week or two to go before it's in solicitation. But I thought it would be fun to show and document the process Joe, Marc, Ben and Myself undertake with getting something like this out. Well, my process, anyway. I'd want to ask the abovementioned gentleman before I spill any of their proverbial beans.

Way back before there was even a plot for issue #1, I would amass piles of drawings, sketches and full-on marker renderings of our hero Chuck, his rabbit Caesar, their antagonist Demon Empty--and ideas for whatever other types of characters and creatures the colorful world we were creating could contain. Below was one such idea. I suppose in my own inner mind's dialogue I had cast Demon Empty introducing Chuck to various body-less convicts incarcerated and cemented into a Kirby-esque wall(s), complete with spit valves and drains for their drool (my touch). 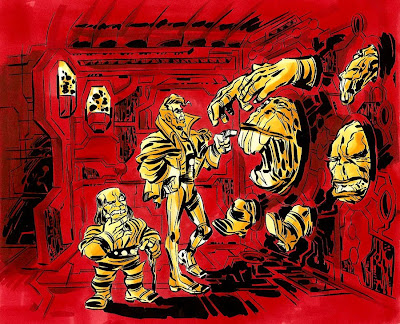 Okay, so now that issue #2 has not only been plotted, but completed and scanned, it was time for its cover. The heads in the walls(s) had now officially taken on a different type of narrative purpose--in the type of mind-spinning way only JOE CASEY can deliver (you'll have to wait until the book comes out!). I did this sketch over Christmas, actually. 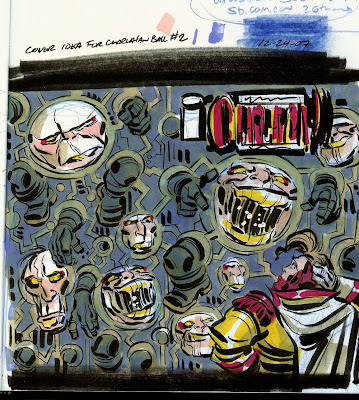 Having to explain the logistical perspectives of these massive heads-coming out of walls-creatures to my father in law, then further criticisms added from Joe, showed me the better way to showcase these gaping mouthed decaps. In fact, Joe has been the king of pushing me further and further out of my comfort zone. To think outside the box, truly--"hey, instead of making that guys cape on fire, you should make it MADE out of fire!", that sort of thing. 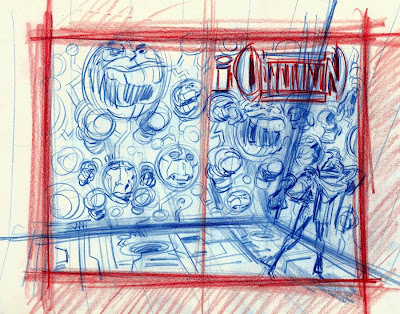 More encouraging from Joe to push the perspective further (see wall on left side)... 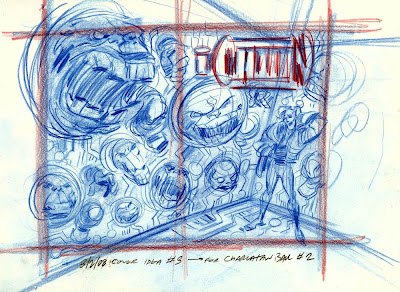 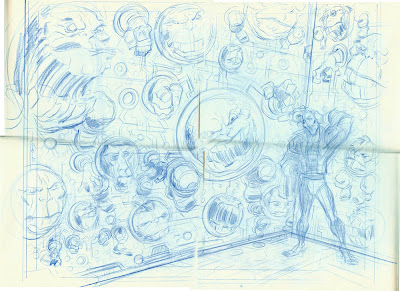 That being said, I'll be the first to point out my short-comings in the fine-art of perspective. What possessed me to use circle template guides with complete disregard for any vanishing point could be attributed possibly to the tantrum I throw any time I try and impose said vanishing point on my image. 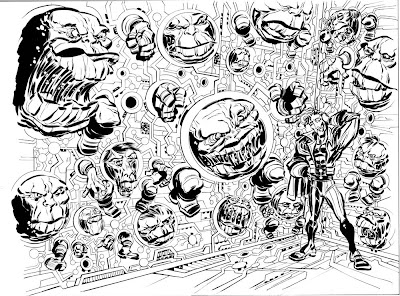 After my buddy Ben Kalina scans my ink drawing, he adjusts the levels to find the right B+W values--then sends it to Marc Letzmann, who then does a beautiful job coloring--and after he delivers that splendid piece of finely honed hues and harmonious palette, Joe and I insist he CRANKS UP the saturation to the point it screams off the screen--and then, after he asks "why is the cover yelling at me?!" our cover is completed! 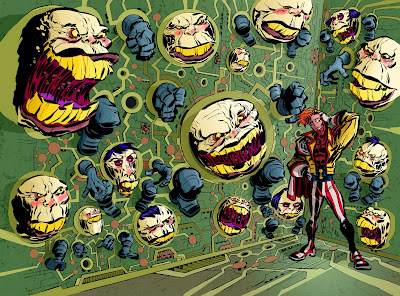 Extra credit for those of you that can spot the Don Rickles and Rick Ocasek in drag heads.
Posted by wolfboy at 11:58 PM 5 comments: 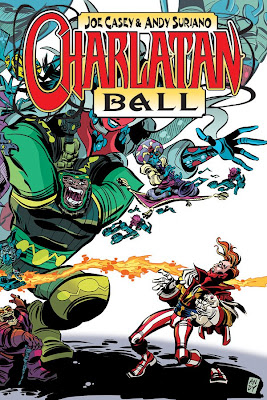 For the whole, partial story, check out THIS Newsarama site
More bits, bites, tidbits and pieces as they start rolling out.
Posted by wolfboy at 9:54 AM 2 comments:

"NO ONE HAS A CRUSH ON PETER" 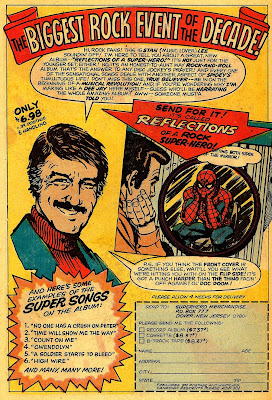 Amazing.
Posted by wolfboy at 7:03 PM No comments: