It's a long way to go for a sentence, but it's exciting nonetheless!

...continuing a steady flow of good reviews. I can't wait for later issues (and much better art) to hit the stands.

Thanks again to everyone that's picked up a copy.
Posted by wolfboy at 3:07 PM 3 comments:

--That has totally knocked me on my ass, recently.

The first is more GODLAND covers. It's interesting, in the latest KIRBY COLLECTOR #50 (or, as it appears on the cover: "KIRBY FIVE-OH!"), from Twomorrows Publishing, Godland artist and fellow JOE CASEY collaborator TOM SCIOLI said in an interview, oh God(land), I just looked it up to quote--but must've gotten my sources mixed; in any event, he had said somewhere that he was going to "stop trying to do it the Kirby way", or something along those lines--and problem solve as he, himself as an artist would. Whatever he's doing, it's working! Check these out: 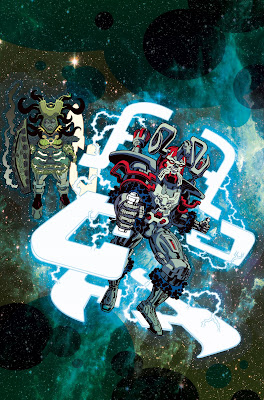 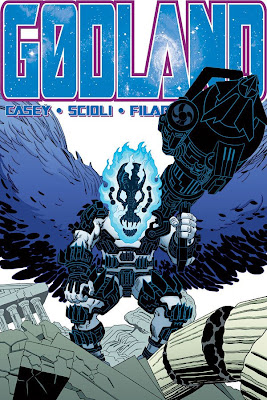 Then of course, good-golly there's Tim Sale...yes, he's the artist behind the artist that paints the future, but Issac never painted like this. Those colors are amazing too, huh? 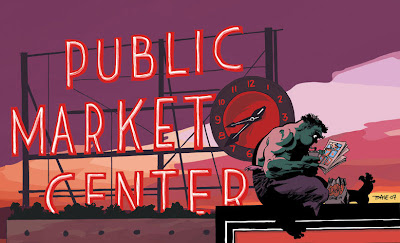 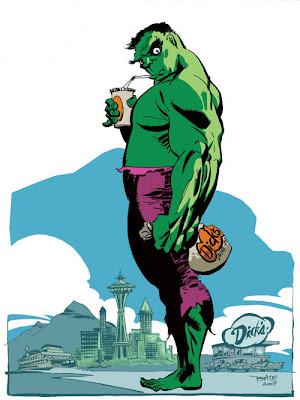 Now, check out this Argentinian artist, MAX FIUMARA. He's collaborating with writer JOE KELLY on another Image title called FOUR EYES. Wow. His inking takes my breath away. I know how that sounds, but...look at these pages! 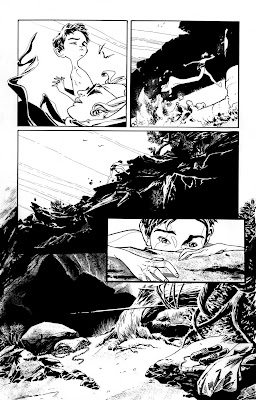 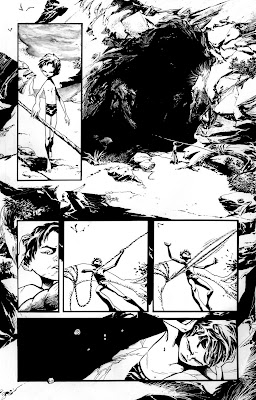 This was my very last paying job before marriage...something Paul Levitz at DC actually asked Tom Kenny and myself to develop ages ago, when it didn't look like we were going to get the clearance to do PLASTIC MAN. Fearing a "bait and switch", Tom and I declined...along with doing a Plas comic (PRE--Kyle Baker, I might add). Now, years later and nearly a month ago to the day, this was being talked about again @ WB...w/out any participation on my part--although the guy they WERE talking to I'd give a nut to work with. I'm not sure I can reveal his name, but he's seemingly the ONLY writer @ DC--prolific to say the least...(Jeff but with a "G"!)...hehehe

I absolutely loved working on these. Very fast. I would've liked to tweak and "flesh-out", their albeit metal designs. 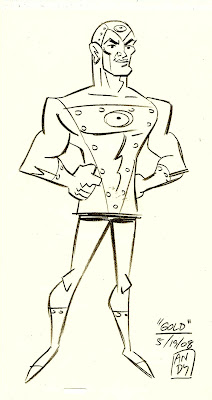 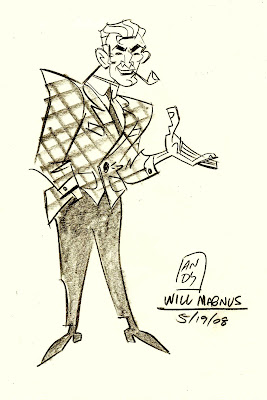 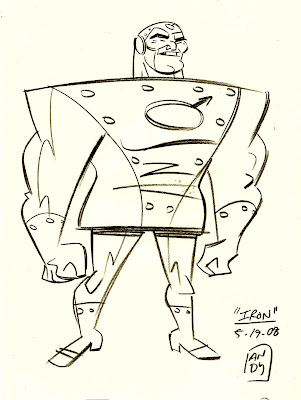 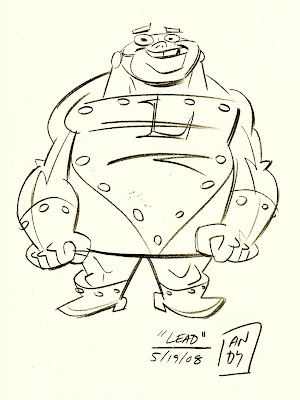 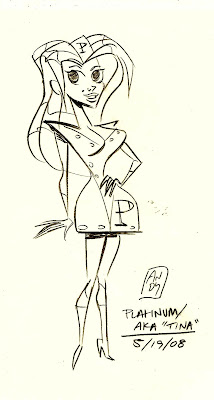 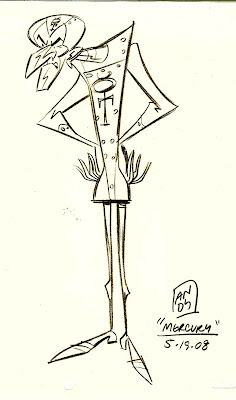 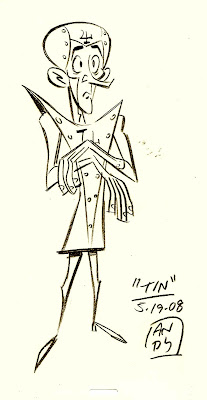 Returning from my vacation I found out that not only is the project may or may not be being reworked (most likely without any further assistance by yours truly), but there's a(nother) completely new head of WB!? ...AND gas prices had risen .65 cents!!! We were only gone for 2 weeks! Geez. Talk about a Rumpelstiltskin moment.
Posted by wolfboy at 4:28 PM 3 comments:

Email ThisBlogThis!Share to TwitterShare to FacebookShare to Pinterest
Labels: Freelance

Okay, so by now everyone that reads this has gone out and bought at least 3 copies of CHARLATAN BALL #1, right?? I have. In fact, I've donned fake glasses and beard on some occasions to go into the same shop TWICE! hahaha Big thanks to Mr. Andrew Salmond, all the way in the UK and our own "Uncle" Phil Rynda here in the states for their promoting of said, above mentioned book. Super-secret, ultra-rare, highly collectible Charlatan Ball tee-shirts that are being printed now will be sent your way! Send me your sizes.

Thanks to those who wrote to me, a big thank you, my blog messages rarely reach double digits--I've a lot more (of your) links to add. Please keep writing in, let me know what you think as the series progresses. Personally, it was a strange and almost irksome feeling to pick up the book, in all it's floppy-paper goodness (or bad) and stare at work done almost 2 years ago that I feel looks muddied and awkward in comparison to the pages leaving my table now. Oh well, I hope readers hang in and stay on board, it's going to be one hell of a ride!

I also wanted to address those of you who weren't able to find CB#1 at your local comic shop; or those who're confused as to why this would happen or think the book might be late in any capacity. First off, Joe and I have nearly 6 issues already in the can, as they say, prior to issue #1 hitting the racks. That insures us, and you, the buying public that the book absolutely, positively will be released on time. That being said, for whatever reason, apparently Image books sometimes are delayed a week, give or take from their intended release date. It's not that we the artists are behind, but could very well be that Image's printing #'s are lower than the "big 2's" and Diamond, the distribution company waiting to pack more books per box. I could, of course talking out of my ass--but it sounds good, right? Another reason could be a lot of smaller comic book retailers are afraid to carry books being published outside of Marvel or DC. But keep asking your no doubt condescending shopkeeper to order you copies through his or her Diamond/Previews ordering catalog. Back issues are usually available, even after they're released.

That being said, I guess numbers on the first issue have been decent, as in good, as far as Image titles are concerned. Reviews have been pretty good too! Some dare I say "great" even...then there was one that graded the TV show CHUCK comic higher than ours...let's see if that lasts. At the very least, folks are writing, commenting and reviewing this book out of a massive piles and sea of others.

There was some questions regarding the image I posted previously. That is in fact the cover to issue #3, due in stores Aug. 20th. I'm not sure why so late, as issue #2 hits racks July 16th!?

Before I go back to posting non-CB related materials, thought I'd share some more of my process creating a cover, in this case, for issue #4:

I usually start with a handful of thumbnails--some being only a few inches tall. Scanned, I send over to Joe Casey and get his thoughts. This drawing actually replaced a few other ideas I had previously decided on. It felt right. 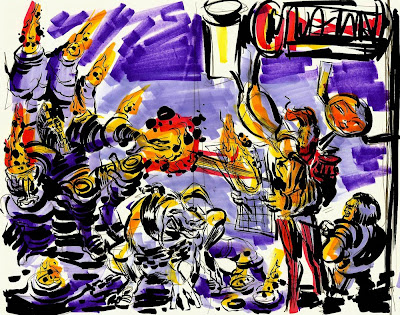 A little tighter and "at size", I wanted to send Joe a specific shot of Chuck's acting, etc. 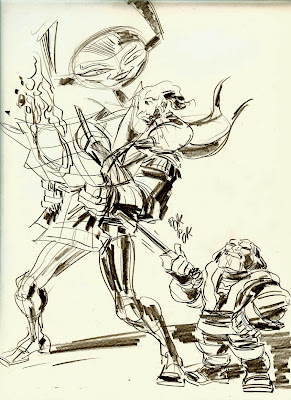 The final inked version, scanned by my good friend who's credited with "digital assists", Ben Kalina. 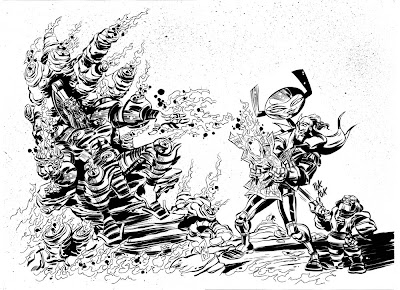 Then on to Marc Letzmann, who colors the thing. 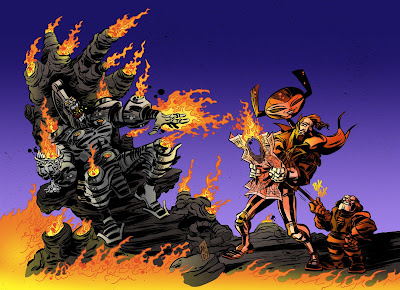 IN STORES THIS WEDNESDAY!!!

That's June 11th...issue #1 of CHARLATAN BALL premiers! Please feel free to promote or display on your blog(s), websites, diaries or dream journals. More importantly, go BUY it! In case you are stationed on a remote Antarctic viewing outpost, feel free to use this Comic Book Shop LOCATOR to find a store nearest you.

I figured since I've posted the cover to #1 so many times you're sick of it, here's a preview of issue #3. 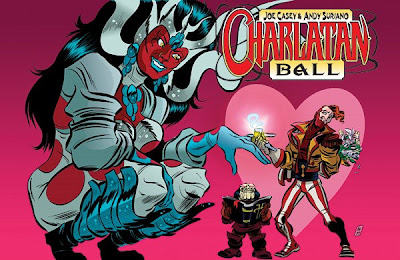 P.S. Thank you to those who've written in, posted or linked with me. I just got back into the country after a long honeymoon and will do my best about getting back to you, linking and commenting.
Posted by wolfboy at 8:53 AM 12 comments: