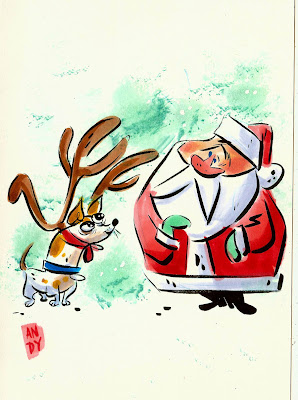 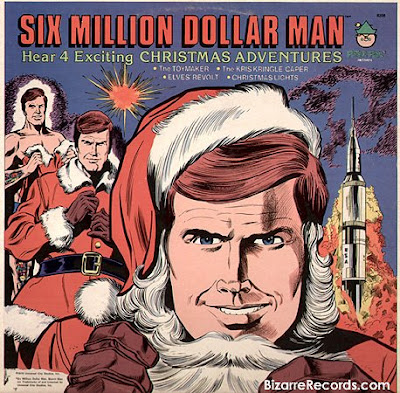 This image was sent to me by my good friend Michelle. She's got even more bizarre (i.e. Incredible) displays of Xmas imagery and album covers at her blog, Tiny Picnic.

Have a six million dollar Christmas and New Year, everybody!
Posted by wolfboy at 1:56 PM 4 comments: 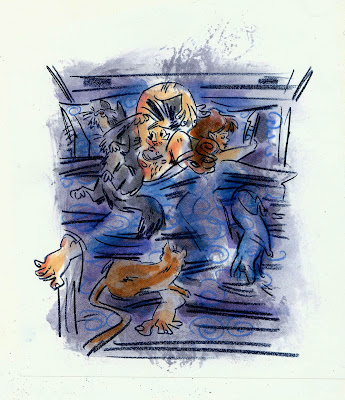 So a couple months back, for my birthday, my friend and fellow collaborator BEN KALINA came over carrying a box, nay, THE box I've yearned for-- for nearly three years. A Cintiq. For me. On my birthday. I thought: "Either Titmouse is paying better than I thought, or Ben stole that sucker before he left WB!". 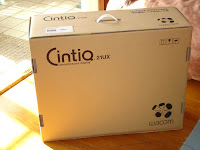 His possible impending arrest aside, I giddily accepted the gift and ceremoniously laid it out on my dining room table to open... 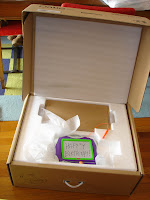 To reveal a pixel-based drawing apparatus of SOME kind...just not the one I had thought. Nestled inside and carefully wrapped, the what I thought was an inappropriately priced gift (or stolen) piece of technology I was receiving was instead a Fisher-Price "Doodle Pro"!? I'm not sure what mixture and combinations of surprise, humility, laughter, heartbreak and confusion betrayed on my face--but I was utterly impressed at the amount of creativity that went into getting me disappointed opening up a present (my parents seem to do it every year without a fraction of the thought! haha)--and being humbled that I completely disregarded my own common sense that the box was light as a feather (I thought it might've been a new model!). Ben even included installing instructions and mounting brackets! 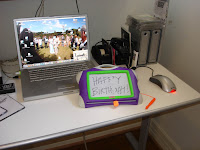 ...though I'm not a fan of the show, "Heroes". Loathe it, actually. Tim Kring thinks superheroes are dumb and has no respect for the medium and merely attached himself to a fad. I'll say it: I like spandex. Don't get me wrong, I love 100 Bullets' crime noir, sci-fi and I'm awestruck by Jordi Bernet each month in DC's western, Jonah Hex--hell, I even love a darker, grittier, "real-life" take on The Punisher. I dig comedy and indies. But reading Marvel's recent mini (maxi?)-series Secret Invasion reminded me of the late '80's, riding my bike up to Dave's Comix to buy the latest Secret War. I like Daredevil having lady troubles, nervous breakdowns and his annual disbarment--but I also love seeing him in his red tights, kicking ass in Josie's Bar and shaking down Turk, the low-level, lowlife and snitch. Homoerotic undertones? Maybe. Latent homosexuality masked BY masks, muscles and musical-like choreographed fights? Probably. But I'll take it. I say, put Luke Cage back in his yellow satin shirt and tiara! You know you want it.

I've always wanted to do a DEMON series... 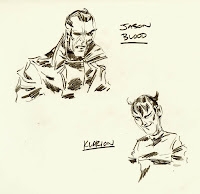 Jason Blood was one of my favorite Kirby characters. Even visually, his blood-red hair and white streak--so, so cool.

Here's a couple of 'love-letters' to Rick Remender. FEAR AGENT is a super fun read, with a great anti-hero, "Heath Huston".

And you should buy THE END LEAGUE on concept alone... 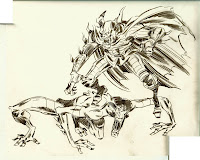 I did the next few sketches awhile back. One of my first posts was about Gene Colan's DOCTOR STRANGE. He's one of my favorite characters--totally underused in my opinion . 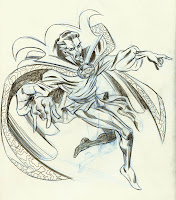 I can't remember if I've already posted this Martian Manhunter before. I did this a year or two ago. Sometime's I get disappointed by the lack of "design"--especially in Team-Up books. If you got a big brawler dude on the team, give him some weight, mass, etc.

Oh well. I had fun drawing these. Superheroes. Sigh.
Posted by wolfboy at 11:16 AM 11 comments:

I had another pitch for this project the other day. It's been 3 or more years in various stages and to be honest, felt like talked to death--so I decided to update a few drawings and sort of re-energize any interest I had. It worked, sort of. Even in the room, during our song and dance, something felt missing--you know, that one, key element that ties it all up in a neat, nice bow? That one sentence, X-ingredient that makes all good ideas great. It wasn't until I was driving home (!) from the meeting that I had the epiphany of what that was.

These drawings were done very quickly (like all my marker comps) and don't reflect that dramatic change yet (I'm not that trusting!)--but thought they were safe enough to share. 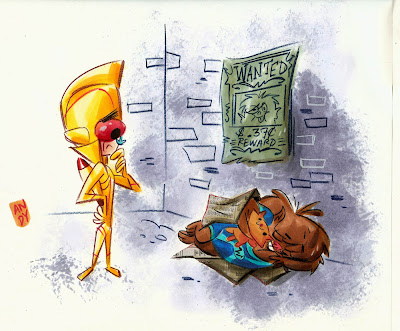 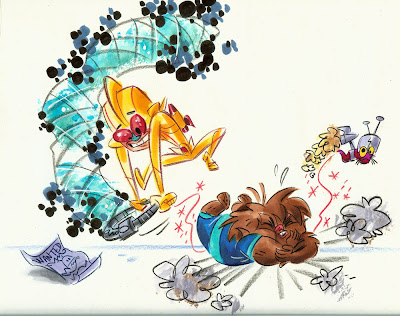 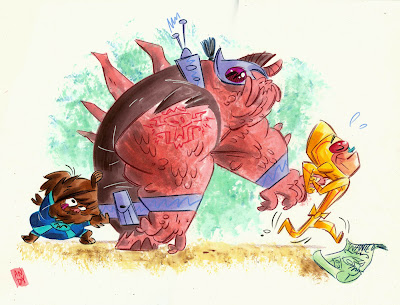 I like the texture I got on the big alien dude.
Posted by wolfboy at 3:48 PM 11 comments: 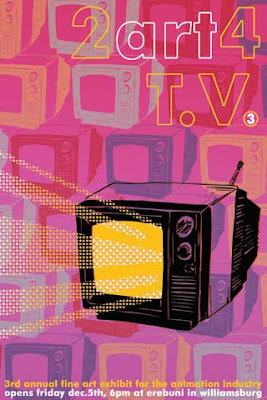 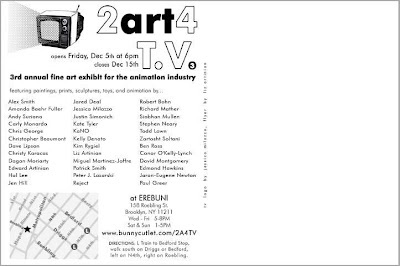 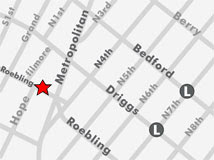 I'm so excited to be part of this show--and to be able to make a short trip out to the city (I wished I moved to). If you or someone you know lives there, stop by! If you have any suggestions of cool comics shops to stop at, please let me know: I'll be needing to pick up my copy of CHARLATAN BALL in NY, since I'll spend "new comics day" on a plane.