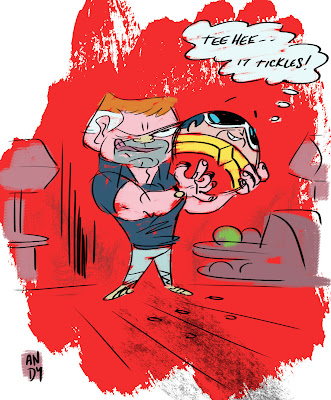 I love the fact that I keep coming up with episode ideas even though the show didn't get picked up...5 years ago.
Posted by wolfboy at 1:29 AM 5 comments:

BLAST FROM THE PAST... 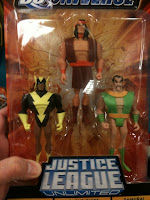 I was at Target the other day, when I saw this 3-pack. I couldn't believe my eyes. Really!? They made NEW toys of possibly the most racist, unPC 'tokens' in the Superfriends (well, depends how you lean on Jace and Jan's sexual orientation). Foregoing my recent embargo on purchasing any more toys, I sort of used my son as justification. Plus, I loved that none of them wear pants. 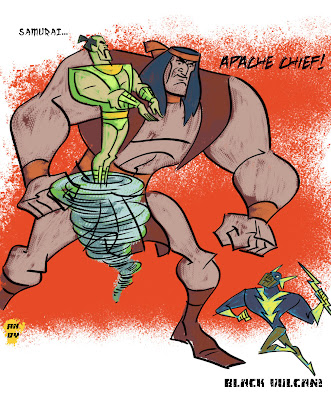 I did this drawing out of pure giddiness.
Posted by wolfboy at 12:31 AM 5 comments: 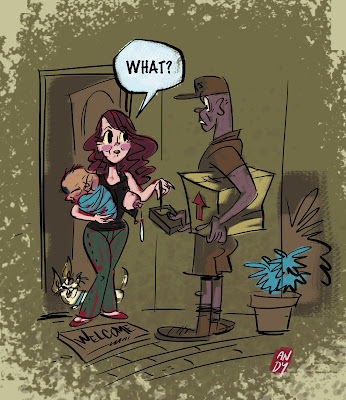 SOME IMAGES THAT MAKE ME HAPPY...

Yes. I like superheroes. So what, get off my back. But what I appreciate more than images of scantily clad babes and men in tights are artist's with their own distinct style and takes on my heroes. I just saw these recent solicits...

Doctor Strange. Brendan McCarthy. It's like chocolate and peanut butter! 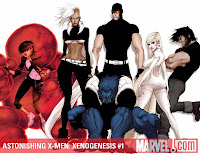 Kaare Andrews, who did "Spider-Man: Reign" a few years back, is jumping on Astonishing X-Men. There's an interesting article on Newsarama where he talks about diverging from the current trend of photorealism in comics--which makes me only want to check out his work even more.

These HULK covers by John Romita Jr. make me weep. Those colors are really impressive too. Love 'em. Absolutely love 'em.
Posted by wolfboy at 9:59 PM No comments:

ANATOMY OF THE COVER

Since I posted the final version of the cover in the previous post, I thought it would be interesting to show the process that went into it. Above and directly below are tiny thumbnails to run past the editors. More or less variations on the same idea.

They went for this one; with the minor note of having Batman and Aquaman reflected in Ocean Master's crystal, versus eyes...

*In response to a recent comment posted, this cover and all of my Batman Brave and the Bold, Gym Partner and Charlatan Ball pages are available for purchase. To see more, just click on the link in the left hand column (under the teeshirt ads), or just go here.
Posted by wolfboy at 10:04 PM 3 comments: 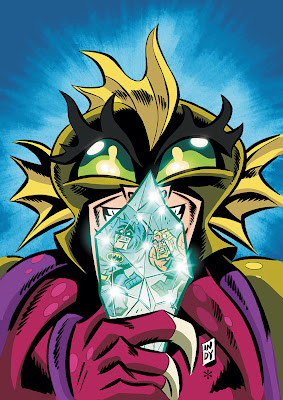 I just saw this solicited for release sometime in May; it's apparently issue #17 of BATMAN THE BRAVE AND THE BOLD. It was the first time I not only got to do a cover for the book, but inked it as well. I'm not sure who the colorist was, but assume it was Heroic Age or whatnot. I hadn't known DC wanted it inked as well, so in the timespan of just over an hour, I ran home from work, inked it, came back, had it scanned and emailed. Good think there wasn't much detail. All in all I was pretty pleased, but realized too late that I messed up Aquaman's eye with a shard of crystal. Here, let me point it out for you...hahaha
Posted by wolfboy at 4:49 PM 7 comments: 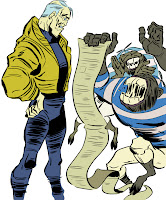 "FINALLY THROUGH DICKING AROUND!"

Phew. As I mentioned in my response to comments in the previous post, this little 8-page story will be coming out inside an anthology book published by my good friends over at TITMOUSE STUDIOS. And even though the smaller page count was a relief, this was the first time I was responsible for every single aspect of production (in the digitally age--for those that remember, BIG HAIR PRODUCTIONS was entirely lo-fi, zipatone and all). And, as always, working digitally for me always brings agony! hahaha
Posted by wolfboy at 2:41 AM 1 comment:

I don't want to give too much away, but I have been pleased with how it's all coming out. It's an idea that came out with me from Detroit, that's been started, shelved and started again more times than I can count. The fun part has been coming up with a color theory and visual vocabulary that was both graphic and minimal, as well as deliver some sort of emotional evocation. Aside from my love for old(er) comic book coloring, I developed the style years ago while working on yellow post-it notes with limited markers at my disposal. Who knows, it could all be crap, but it's my crap. 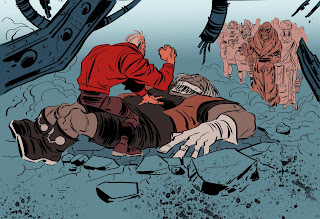 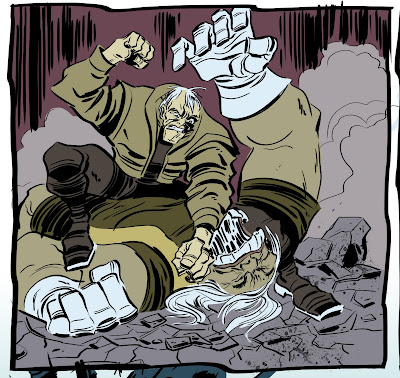 This is probably up there, in terms of one-of-the-cooler-things-to-happen-to-me-professionally...
John K actually liked my Plastic Man pilot!
Better late than never. It's amazing how many more people have viewed this since John K posted it:
Posted by wolfboy at 1:47 PM 10 comments: