Hey all you hep cats, vinyl vixens or altogether appreciators of cool lettering and mid century drawings and designs. Among other things, my wife and I are in the process of moving--meaning lot's of mini treasures have been unearthed. For instance, check out the chianti bottles hanging off that donkey (not a euphemism)... 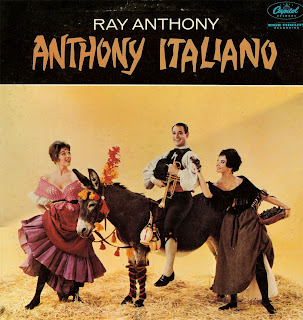 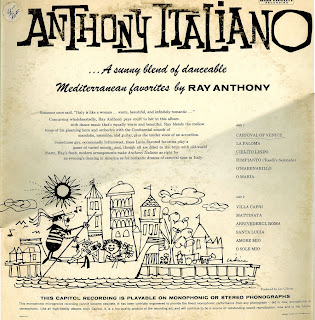 Don't you get the feeling that this drawing, whose design aesthetic has been painstakingly attempted and replicated over the recent years-- was done effortlessly? I recently bought some album frames, but don't want to hide either side!
Posted by wolfboy at 4:00 PM 1 comment:

BRAVE AND THE BOLD: "ETERNITY!"

Issue #6 of BATMAN BRAVE AND THE BOLD came out this week. Up top Batman teams up with Hourman; then a few pages later, solicits the aid of...KID ETERNITY! I was so stoked! Kid E is actually one of my favorite Golden Age characters as well as Grant Morrison's revamps.

I really appreciated reading this Newsarama.com blog referring to me as, well, you can read it: "...Writer J. Torres and pencil artist Andy Suriano, the strongest of B:TbntB’s pencil artists, would have to work really, really hard to make this anything less than awesome."

So, only for you loyal readers of my humble blog, I present to you my pencils for this issue in their entirety:

Want to buy one of these pages? You can! Let me know which page--and I should have it available in a few months after print.
Posted by wolfboy at 9:05 PM 9 comments: 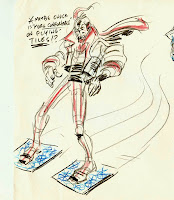 Way back in CHARLATAN BALL ISSUE #2, Chuck and Caesar found themselves in a hooka-inspired, India-like landscape. I had an idea that didn't quite make it into the book of Chuck purchasing a flying magic "tile", instead of the typical magic carpet. I wanted it to be like a carpet or tile liquidators warehouse. But, the book being 18 pages, this little tangent didn't make the cut. What ELSE didn't make the cut? These development sketches for that issue inside the CHARLATAN BALL TRADE PAPERBACK, finally available for sale the week of San Diego Comic Con! These would've been fun to see in there, but truth be told, we had so many sketches, roughs and other special treats just for the TPB, so I thought I'd share these here. 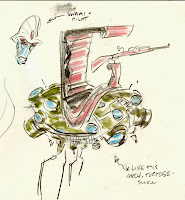 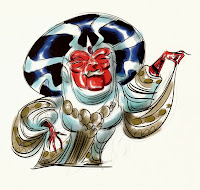 But what you should be asking yourself is: "if THESE didn't make it in, then what DID?!"
Posted by wolfboy at 6:46 PM 4 comments:

Or is it the Old Ones, now? Pre "Final Crisis", pre "Death of the..." Either way, here's more commission fun with this one! Here's the rough... 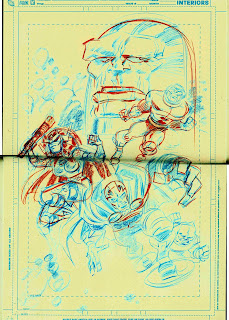 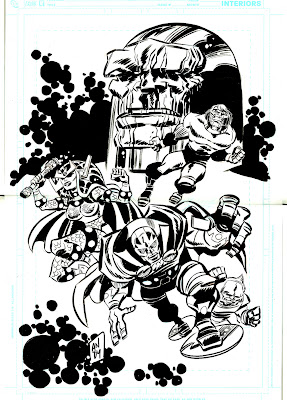 I'm glad Quinton and I share the same affection for Orion's mutilated face!
Posted by wolfboy at 11:04 PM 4 comments:

Email ThisBlogThis!Share to TwitterShare to FacebookShare to Pinterest
Labels: Commissions

Those of you that know me, know I like my afternoon "stories"...and have a penchant for armchair bidding on The Price is Right. Even when I had a job, I didn't let a little thing like employment get in the way of getting caught up on who attempted to kill who, who slept with whom, who was possessed by the devil--and how much Gold's Medicated Foot Powder cost in 1998 versus a V8 juice in 2009. 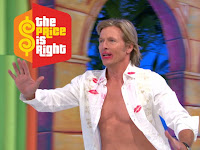 That being said, and being an avid comic book fan, collector and creator--the best crossover event of the year wasn't Civil War, Secret Invasion or Dark Reign--it's not even Final Crisis or Blackest Night...it happened last week on the Price is Right and The Bold and the Beautiful! Behold--and beware, Galactus, eater of worlds...

Do you think he won some cheese with that "brand new caaaaarrrr!!!"?
Posted by wolfboy at 10:40 PM 1 comment:

That's it. Wrapping up with issue number 58, there will no longer be any MY GYM PARTNER IS A MONKEY in Cartoon Network's Block Party title from DC Comics. I actually completed this final 8-pager last year. It was such a blast and I'm going to miss drawing these characters so much. It was also one of those rare times when the actual creators of the animated series were "allowed" to write for the adaptation! In this case, Tim and Julie Cahill--as well as story editor Tom Sheppard. Such. A. Blast.

But check out this BILL WRAY COVER! Incredible! 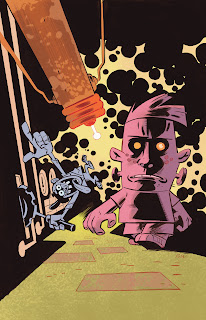 And here are a couple of my original pencil pages from this issue:

Page four above was a "mad scientist" montage.

I was really happy with how much I pushed the squash-n-stretch with the characters in page six (above). Sometimes, when given model sheets for these things, the tendency is to remain so faithful the character's stay somewhat stiff and immovable. So I was happy I pushed it a bit. 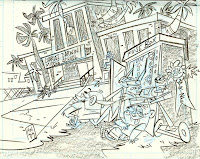 And the final panel of the final Gym Partner story, page eight..."Goodbye CDMS".

Thanks Tim and Julie and Tom and Dan Davis and especially, the best editor in the whole wide world of comicdom: Liz Gehrlein!
Posted by wolfboy at 8:55 AM 1 comment:

I can't tell you what this is just yet...other than it'll be brought to you by the same guys that did CHARLATAN BALL... 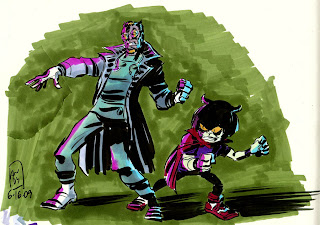 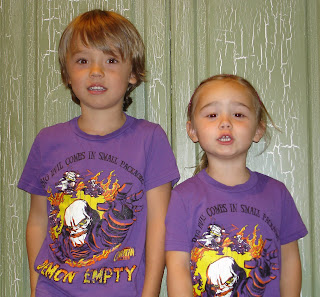 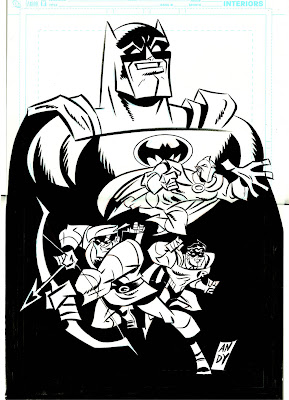 For those of you that forgot my recent post, I've been accepting commissions. This has been a really fun, low-pressure way to draw some of my--and your favorite characters without being limited by a storyline or panel breakdowns.

Email ThisBlogThis!Share to TwitterShare to FacebookShare to Pinterest
Labels: BATMAN: Brave and the Bold, Commissions 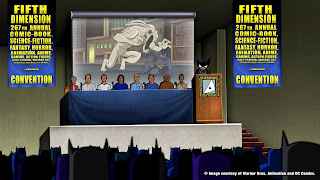 Truth be told, there really is only a certain number of ways you can design a "mutant Easter bunny", but my ego would like to think it wasn't just coincidence. This was, by far, one of the best episodes.

Check it out! The Calender King's creations...and Chuck Amok's sidekick: 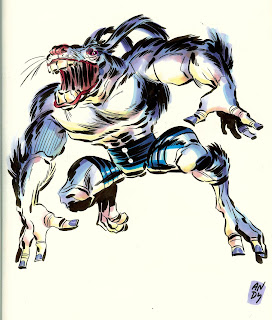