Okay, so it's another drawing of MARVEL ULTIMATE ALLIANCE. But at least it's in markers. 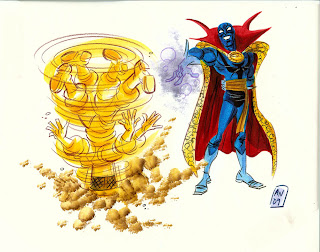 Each character has their own, unique way to "throw" bad guys. Luke cage take 'fools' by the back of the head and slams them, face first, into the ground...repeatedly...until they are dead.

Here's a shot of Dr. Strange (Blue Mage outfit*), doing HIS throw--which is levitating the bad guy (in this case, an A.I.M. goon), suspending him in the air, flipping them upside down, then drilling them into and all over the ground like a top!

*it should be noted I have since switched Strange's costume back to his classic look for energy consumption benefits.

MARVEL should definately hook me up for all this free publicity!
Posted by wolfboy at 5:25 PM

Cintiq? No way man, (can't afford one yet)--this was brought to by (copic) MARKERS and PRISMACOLOR!

WHOA---nice costume choice on Dr. Strange, Andy!
That's certainly not my favorite period for the good Doc (the Thomas/Colan/Palmer era feeling a little dull and pretentious to me), but you never see him wear those threads anymore, and it is a pretty bad ass look!

Whoa! He is so happy drilling him into the ground! Cintiq, shmintig.

Radical. (I fully typed the "ical" at the end of that to show my admiration.) I dig those concepts for the Spidey series as well. I would have shit the kingpin himself out of my bum if they had gone with designs so appealing!

i cant get anywere in this game though!

Dude; that's why I had to get the CHEAT BOOK.

The guy almost wouldn't let me out of the store with it!

And I LOOOOOOOVED the Colan-era work btw Stephen! You're crazy/purist. Or did you like the Paul Smith era?