Ladies and Gentlemen, let me introduce to you the official roster for BAM! INC.: 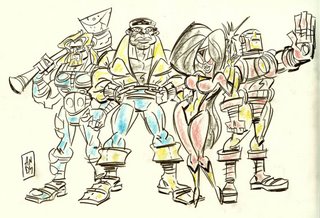 Okay; I'm not sure exactly HOW sad it is that not only did I do a drawing of my MARVEL ULTUMATE ALLIANCE team for PS2, but I'm actually posting it up. About as bad as doing drawings of action figures I posed out. And took pictures of. Sigh. I need to find a job.

That being said, I am totally addicted to this game. It. Is. Awesome.

Where else can you HEAR LUKE CAGE SAY: "You lose, small-fry!" or "Anybody else wanna come get some?!" and who could forget (in his simulator mission): "School's in session and I'm the teacher!"

Another bit of banter I enjoy is Doctor Strange's because he comes off as such a pompous asshole: "Only a fool would dare challenge a master of the mystic arts."

So my official team name is: BAM! Inc. Which was originally apprised of: (Ultimate) Thor, (Classic) Luke Cage, (Modern) Thing and the ultra hot (Classic) Spider-Woman. I then swapped The Thing out for the classic Iron Man...which I later switched to Doctor Strange and Daredevil once they were unlocked!

An update: I am currently in the icy Niffleheim region of Asgard, seeking Odin and battling trolls. Daredevil's taking a breather and I have Doc Strange back in the lineup--mostly because I earned a costume change and have him in the "Blue Mage" outfit which is MY FAVORITE!

That, and he can turn bad guys into boxes!!!

I love that arabian casino!!! sweet stuff. you know I have a big hair productions comic I bought on a whim from 2001. I dug it out yesterday, nice inking in there.

We are polishing dodger up real nice, it was a blast! hope it goes to series, it has a ton of potential.

Dude, I was soooo adicted to this game as well. My team was Beta Ray Bill, Moon Knight, Doc Strange, and Wolverine.

Wha'?!?
Why Ultimate Thor with Classic Iron Man and Luke Cage?
Andy, do you want the continuity gods to come and mess you up good?
....
Really, why ULTIMATE Thor?
What's wrong with your dad's Thor?
Also, can you draw Mar-Vell for me?